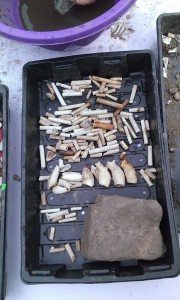 Middleton Archaeological Society (MAS)  began its largest archaeological event ever this month (starting 21st August) at the gates of St Leonard’s Church. The archaeologists are opening a large trench to record the remains of Church House farm which was demolished in 1898. The farm was built on the remains of the Grapes Inn, described by Sam Bamford as a small thatched building that was the meeting place of thieves and villains! Previous test pits by MAS have located the cellar of the pub and a selection of pottery sherds dating back to the mid 17th century.

The event is a community dig so everybody is welcome to come along and have a go.