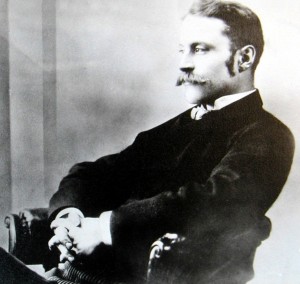 As an architect, Wood worked like an artist with a small number of assistants designing buildings, furniture, stained glass, sculpture, metal and plaster work.  Many  commissions came from friends and family in Middleton, Rochdale, Oldham, Huddersfield, Hale and Stockport.  Influenced by the artistic and socialist writings of William Morris, he saw himself as an artisan serving the people of these localities. 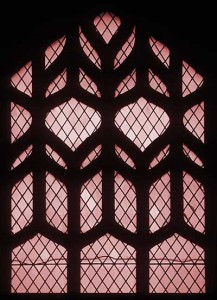 Architecture was changing.  The Victorian Gothic style was on the wane and architects were looking for a new way to design.  Art nouveau was a new style based on extended lines and sensuous curves. The Arts & Crafts, on the other hand, revived traditional building techniques to create beautiful yet practical buildings.  Edgar Wood was a leading practitioner of both. His early buildings revived vernacular features, crafts and techniques.  They emphasized the broad surface quality and colour of the materials. He developed an art nouveau style that emphasized verticality, such as dramatic dormers and tall bay windows that ran through the eaves.  Later, some buildings took on strange forms, confirming his avant-garde reputation.  Gradually, a plain style emerged with decoration carefully placed in specific locations. 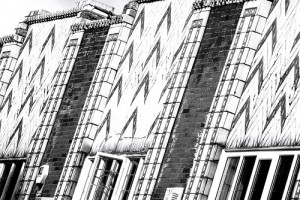 At the height of his fame, Wood joined up with an unknown Oldham architect, J. Henry Sellers, and created a series of radical new buildings.  With their flat reinforced concrete roofs, cubic forms and sometimes geometric patterns, they were the first examples of art deco or “moderne” architecture in Europe.

Edgar Wood later took leading roles in town planning and conservation. He was everywhere shaping the future of Middleton and Manchester. He preserved the medieval Church of St. Leonard introducing art workers like Christopher Whall and James Smithies to enrich its interior. The church overlooks Jubilee Park where Edgar Wood created a staircase and fountain to frame its tower. St. Leonard’s is now the last great unrestored medieval church of the Manchester area. Middleton Library, at the bottom of the park, was the first of dozens of Arts & Crafts buildings to enhance the town. Later, his conservation activities saved the Queen Elizabeth Grammar School, the oldest in the country and Ye Olde Boar’s Head P.H. – the oldest pub in Manchester. A lifetime of commitment by Edgar Wood, his family, friends and followers resulted in the unique ‘Golden Cluster’ of Middleton’s Arts & Crafts heritage. In 1922 he retired to Italy to paint, where he died in 1935.