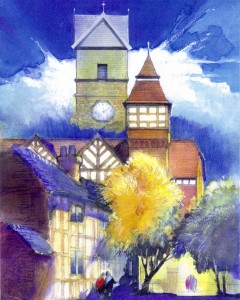 The Arts & Crafts Church is a part of Middleton’s Golden Cluster – a place with five centuries of heritage. It would have looked very different today had it not been for Edgar Wood.

Edgar Wood spent his life reshaping Middleton along arts and crafts lines and by conserving its old buildings. His father and brother were leading town statesmen, so he had a lot of influence. His Arts & Crafts buildings are everywhere.

However, he kept a low profile on public projects to avoid controversy. The idiosyncratic Jubilee Library is straight from his vernacular copybook, but was built by another architect. Likewise, church accounts show he undertook the restoration of St. Leonard’s Church, when it was publicly attributed to the church architect, G. F. Bodley.

Edgar Wood quietly redesigned Jubilee Park planting naturalistic Rhododendron beds and laying out paths and when Ye Olde Boar’s Head was to be demolished to make way for a new Town Hall, he worked behind the scenes and stopped this from happening. Even his role as designer of the Arts & Crafts Church was kept secret until the very last moment. 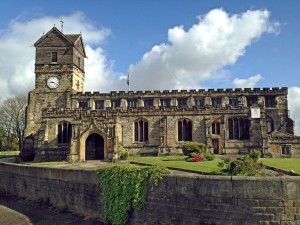 The Middleton Golden Cluster is thus Edgar Wood’s legacy. As well as his Arts & Crafts designs, there are three outstanding listed buildings… St. Leonard’s Church, Ye Olde Boar’s Head P.H. and Queen Elizabeth Grammar School – respectively, the oldest church, pub and school in Greater Manchester. All three are opened for visitors as part of a Golden Cluster Tour. There are also Georgian weavers cottages, Victorian silk factories and, of course, the Arts & Crafts buildings of the Edgar Wood trail – such as Redcroft & Fencegate, 36 Mellalieu Street and 51-53 Rochdale Road.

Edgar Wood was greatly influenced by Samuel Bamford, the Peterloo radical, poet and writer. Visitors can relax in his room in Ye Olde Boar’s Head P.H., visit his grave and see the monument raised to his memory as part of the Samuel Bamford Trail.