Hopwood Hall is one of the truly great buildings of Middleton and Manchester but one which has sadly been abandoned and left to decline for many years.  In recent years, the Council has tried to make amends by providing security and undertaking urgent repairs. There is always hope and a host of volunteers have showed willing to help in many different ways over the last ten years. Credit should go to Mr. Bob Wall for his many efforts, to Andy Marshall for his amazing photos and time-lapse videos and conservation expert Alan Gardner whose advice was critical to saving the building when all seemed lost. Over the last year or so, a new effort has been launched, led by Hopwood DePree, a descendant of the Hopwoods. A special outcome is that limited parts of the hall will be opened to the public over Heritage Open Days 2017, provided you book first – click here for more information. 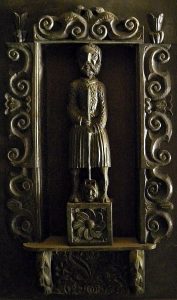 Hopwood Hall is a building of many ages where the work of the medieval carpenter sits next to that of the modern builder. Its history is long and complex and the buildings ‘ramble’ like no other. Edgar Wood was a fan and around 1910 carried out a sensitive restoration which, including a formal exedra and steps and a long plastered corridor leading to an inglenook. His improvements complemented the characterful earlier work by the Victorian architect Geoge Shaw of Saddleworth.  The hall interiors are rich in Jacobean panelling and plaster work but many floors are too rotten and dangerous to walk on.

Hopwood Hall is remembered by students of the old De La Salle art college of the 1980s – the chapel to the college is also a listed building but of a very different type, a modernist creation of the 1960s – famous for being the Liverpool Roman Catholic Cathedral in miniature.