Alkrington Hall, Middleton was built by Giacomo Leoni (1686 – June 8, 1746), an Italian architect born in Venice. He was an enthusiastic pioneer of the eighteenth century Palladian style which swept the English speaking world. Due to numerous demolitions over time, his buildings are now extremely rare. Tragically, one of the best, Clandon House, Surrey, the sister house to Alkrington Hall (featured in the Enlightenment Middleton film) has today suffered a major fire. There has been enormous destruction of the interiors. Here is the BBC report. 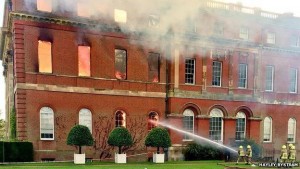