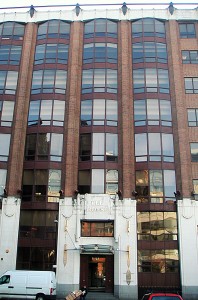 The event celebrated the two architects’ contribution to Greater Manchester’s architectural heritage and included Edgar Wood’s watercolour of J. Henry Sellers’ design for Lee House, Manchester. The painting shows how these Arts & Crafts modernist pioneers were still pushing the boundaries in the late 1920s and early 30s. Lee House comprised three cubes which would have made it the tallest tower in Europe, had all been built as planned. As it was, only the bottom part was constructed and the clarity of the Sellers’ modernist design was diluted with mainstream art deco ornament in a tussle for architectural control with Harry S. Fairhurst and Son, the firm which erected the building. The tale of the building’s design is told by Victoria Jolley… Click Here

The evening and exhibition were part of a programme celebrating 150 years of Manchester Architects held at the MMU Special Collections Gallery.  Called, ‘We built this city‘ it charted the influence of the Manchester Society of Architects on the cityscape and architectural design in Greater Manchester through original drawings. Rare folios from the MSA Library at MMU Special Collections showed the wealth of material on offer to members who frequented the Society’s rooms. Highlights included work by W and G Audsley, Owen Jones, William Kent, Palladio, Piranesi, Stuart and Revett and, of course, Wood and Sellers.