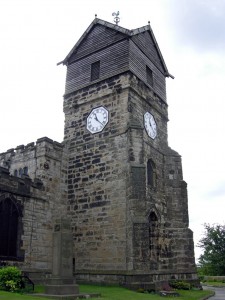 Peter Ryder is a true expert on medieval churches.  He is the author of books and papers, has advised dioceses on their churches, has visited every medieval church in Yorkshire, has turned previously turned history on its head, e.g. discovered a 7th century church when it had always been thought to be of much later date.  We are extremely grateful for his recent visit to St. Leonard’s Church. I hope all I’ve written is both accurate and informative. 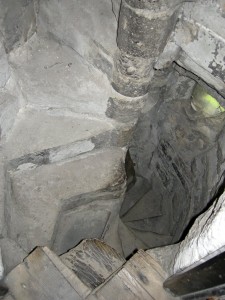 After we climbed the tower, Peter spotted several things of importance:
The vice (staircase) is so rough that he feels it was carved inside the stonework of the tower corner and the adjacent buttress. Had it been specially built as part of the tower, the stonework  would have been much neater.

The missing first floor was more than likely for access to the organ loft/balcony, built specifically for that purpose. Now I think about it, there are many early towers that have the first floor at a similar level as our current first floor. A church at Barton under Needwood, near Burton on Trent, has an intermediate floor which is their ringing room. I need to check if they had a gallery. 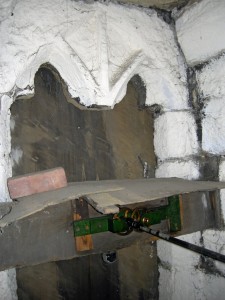 The bell openings (now covered by the clock faces) caught Peter’s attention. He thinks the shape of what is left of the tracery is 14th not 15th century. He also noticed that the jambs of the east facing opening are different than those of the north, west and south openings. There is stonework that projects two or three inches out into the space but only in the lower third. But why?

There is a cupboard built into the east wall of the ringing room. Peter thinks this might have once been a window for the bell ringers to see where an ongoing service was at.

He suggests we have the joists in the ringing room ceiling dendro dated.  He thinks it would be helpful to clean the walls of the paint to see what is underneath. 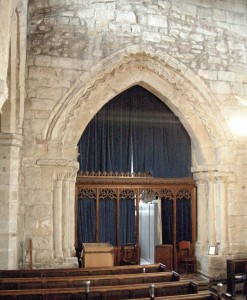 As to Peter’s thoughts on the west wall:

The arch is more than likely made from the chancel arch rather than a doorway as the jambs are not correct for a doorway. However, he acknowledges the columns appear weathered. (could this be because they were once plastered and the plaster has been hacked off?)

The interim vertical line in the rubble work, some eight feet to the left of the north arcade, makes Peter think that this may have been the width of an earlier nave. Our church is particularly wide, a hall church, a nave/chancel church perhaps without side aisles. He thinks we should do an archaeological drawing of the west wall to work out its construction and spot any alterations or additions.

Externally, the tower north wall and the corresponding west wall of the aisle, were constructed at the same time. Does this suggest that the diagonal line of stonework from the tower buttress to the plinth marks the width of the nave? (we examined the wall and lower moulding, etc, this morning.)

Peter was interested in the Assheton chapel and the walls in the area of the priests’ door.

He suggests that gravestones were often used as lintels in the construction of windows and spotted the large V carved into the lintel on one of the north clerestory windows.

Peter spent some time examining the carved grave stone and the recumbent cross carved on the horizontal stone. The latter was difficult to date but the former caused him great interest. It is “high status” and “French” in style (Norman?). Peter photographed it and made a detailed drawing too. He spotted upper parts of fleur de lys surrounded by leaves. Peter thinks the the stone would have been 12″ wider and somewhat longer so some of the base has been lost.

Our church keeps on throwing up historical gems, potential or confirmed.

November 22, 2014
Arts & Crafts Awakening Comments are closed Geoff W
← An Evening with the Civic by Lee Wolf Could Jubilee Park Fountain be Restored? →