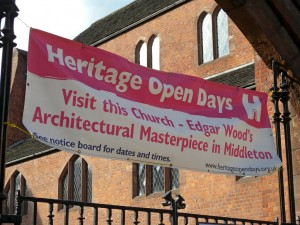 Golden Cluster Month has had another successful year with hundreds of people enjoying four heritage buildings open to the public and various events laid on.

Things were brought to a close by Middleton Heritage Film Group’s ‘Enlightenment Middleton’ film, directed by Anthony Dolan. Over 80 people came to the premiere. This is a great documentary which brings to life Enlightenment heroes, Ashton Lever, George Cayley and Sam Bamford and Middleton’s unique Palladian house, Alkrington Hall. The film will shortly be uploaded to YouTube… we’ll let you know when it does.

Many thanks to all who made September ‘golden’ for Middleton’s heritage!