Edgar Wood’s Middleton home, Redcroft (1891), is been painstakingly restored as part of the Heritage Lottery Fund THI scheme run by the Council and Middleton Heritage. The work is being overseen by conservation surveyors Alan Gardner and Rupert Hilton under the watchful eye of the Council’s conservation officer, Sue Oakley, and is being funded by a large grant from the Heritage Lottery Fund THI.

The scaffolding finally came down last week and while the perimeter wall, gate and other details still have to be finished off, the result was photographed by the Edgar Wood Society to get the good news out. 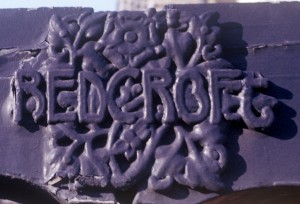 Still to come is the restoration of Edgar Wood’s carved Arts & Crafts motif over the restored gateway. Interestingly, this had ‘Mackintosh style’ lettering even though it was designed by Edgar Wood several years before Charles Rennie Mackintosh had got going (he was eight years younger than Wood). Many historians believe that Mackintosh knew Edgar Wood as they shared quite a few design ideas. The motif suggests Mackintosh visited Wood at Redcroft on one of his trips to Manchester.

Redcroft was built in 1891 at a time when the young Edgar Wood loved the combination of strong red or orange colours set against bright white. He also painted timber and metal details white, in complete opposition to the usual Victorian dark greens and browns. Edgar Wood’s intentions are been faithfully restored in the restoration using historic photographs and the expert knowledge of the Edgar Wood Society. However, a sense of the passing of time is also being kept, for example by not cleaning the brickwork and by keeping the modern iron railings. The result is an orange and white Arts & Crafts house that brightens up the street scene of the conservation area! 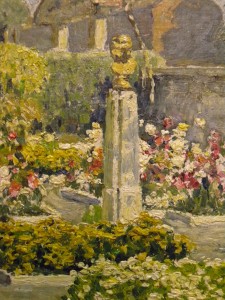 Redcroft and its neighbour, Fencegate, were the first of a new breed of Arts and Crafts semis which combined red brick and white render with a cottage feel. The style quickly caught on and subsequently dominated much of twentieth century house design. The influence of Redcroft and Fencegate can be seen in many buildings across Middleton and the Manchester region.

Edgar Wood lived at Redcroft for 24 years before moving to Hale, Trafford where he built his second home, the pioneering art deco, Royd House. However, before he did so, he gave Redcroft an art deco touch by redesigning the front garden and replacing the perimeter fencing with limestone blocks which were lowered in the centre to set off a remarkable art deco sculpture, which is now unfortunately lost. However, it is recorded in Edgar Wood’s painting of his front garden. In these two houses, Redcroft and Royd House, Edgar Wood used the design of his own home to set national and international trends in house design.

The restoration of Redcroft will complete the restoration of the pair, since Fencegate was restored in the 1990s, a project that involved completely rebuilding the house because of subsidence! 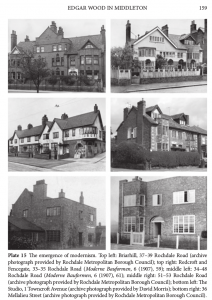 Redcroft and Fencegate belong to Middleton’s core of six Edgar Wood buildings which show how modern architecture emerged from historical Victorian styles (see extract from Manchester University paper opposite). This group is of international significance. With Redcroft and Fencegate restored, attention is now moving to some of the others, especially the neighbouring semi of 1892, originally called Briarhill.  This was Edgar Wood’s first building to be published in the United States of America! The two pairs of orange-red semis set each other off perfectly. When seen together from the south, the houses form an expressive twosome, the larger red building acting as a backdrop to the smaller white one. 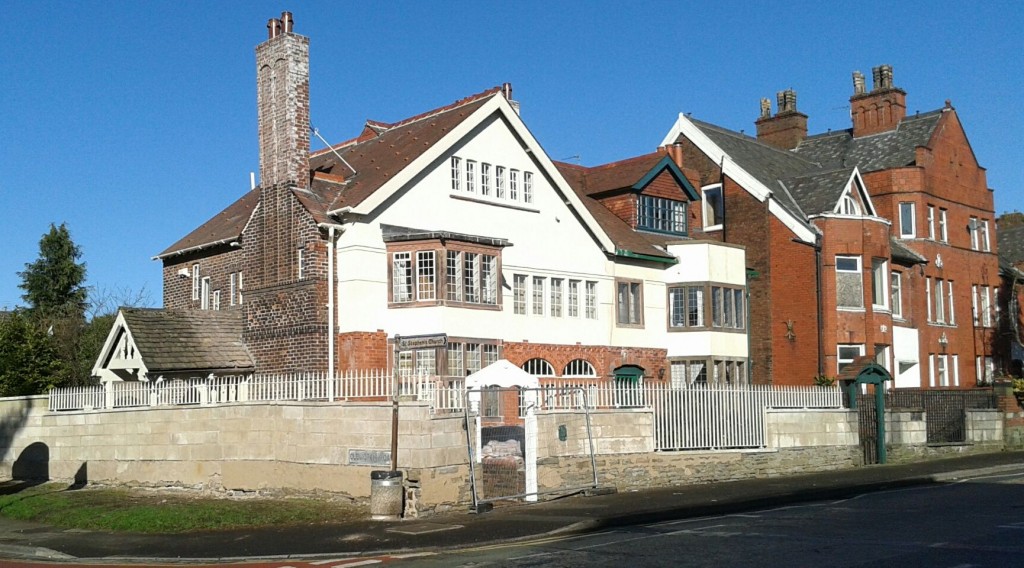