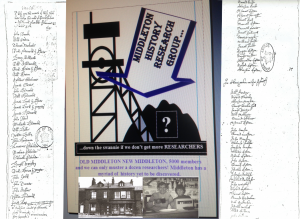 This was the third get together of Middleton’s researchers – six researchers attended with apologies from another five.
Cliff reported on his work at Preston Record office and his new ability to read early documents. He has progressed work on the Ambrose Jackson, one of the graffiti contributors at the OBH. Ann Faloon is also working on this and putting the graffiti people into historical context.
Dave continues looking at the burials in the Old Cemetery, complemented by Glen’s input of names of burials in Churchyard No 3. Each entry can be cross checked which shows up any anomalies.  This will become a very useful research tool for genealogists.
Robert, Geoff and Sharon discussed the contents of various files Geoff had brought along. Robert updated the meeting where he was up to with Middleton archaeology.
Though not at the meeting, Nick, Richard and david are making progress researching Edh=gar Wood’s family, friends and contacts.
Next meeting will be in 3 months… details will be announced in plenty of time.
This is Middleton’s History R&D department – keep on researching!
March 1, 2016
Middleton Heritage Comments are closed drm
← Restoration of Redcroft nearing completion Ye Olde Boar’s Head P.H. – Excavation to Foundations →