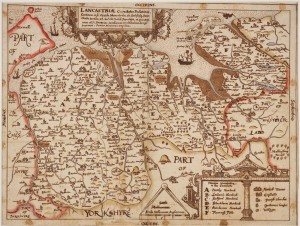 A unique 17th century map of Lancashire found at John Rylands Library has been placed on display for the first time in 400 years. The Elizabethan hand-drawn document, which shows towns and villages including Diddsbury (Didsbury), Garton (Gorton), and Stopford (Stockport) – provides a fascinating glimpse into centuries past. The map was created by cartographer Herald William Smith and has lain virtually untouched in the Manchester library’s collection for nearly 40 years. 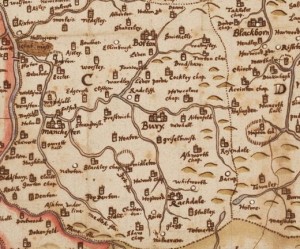 The spidery script – which could almost be taken from JRR Tolkein’s Lord of the Rings – shows that present day districts were known by different names during the time of William Shakespeare. The map, which shows the Rivers Tame and Irk in striking detail, includes districts such as Straingwaish (Strangeways), Wordsall (Ordsall), Edgcroft (Agecroft). and Prestroich (Prestwich). Notice the deer park in the Parkfield area and the fact that the Irk is one of only a few rivers that were named. Middleton must have made an impression at that time.

It is thought the map was made between 1602 and 1604 – long before Manchester became a thriving industrial powerhouse.

Thanks to Cliff and Geoff of MAS for this.