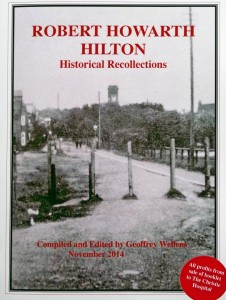 “What they know of Middleton, who never heard The Nowster [bell] toll in 1890? The clatter of lock bolt and bars at the last knoll, or the croak of the corncrake in late summer, the larks in the long grass, the cuckoo floating over the Coppice and whippets hunting hares.”  Extract from Robert Howarth Hilton

Geoffrey Wellens has compiled the illuminating recollections of Robert Howarth Hilton, written when he was an old man in 1974. They were originally passed to Middleton historian, Peggy Smith, but never published. Geoff’s old photographs bring to life Bob Howarth Hilton’s ‘nuggets’ of recollection, mainly about Middleton life at the beginning of the last century.

The booklet is raising funds for The Christie Hospital, with £2 of the £3 cost going to the hospital while £1 covers printing costs.

A great Christmas present for anyone interested in Middleton’s past!