Filming on the Edgar Wood documentary has taken an unexpected turn. Edgar Wood was present at Long Street Church! The June shoot caused a bit of a stir as Mr. Wood gave us a guided tour of his first masterpiece – Long Street Methodist Church and Schools built in 1901.

Fact is, there was a computer course being held in the building and upon seeing Edgar resplendent in Edwardian costume, one lady exclaimed; “Oh, look, its just like Sherlock Holmes”. This cheered-up director, Anthony Dolan and Actor Gareth Mason no-end as they are both admirers of the excellent Granada Television series with Jeremy Brett.

Make-up artist, Jacob McPeake also took pride in his creation having spent over two hours making Gareth into a spritely 70 year old Edgar. The film uses an unusual conceit in that it has EW ‘himself’ assessing his ground-breaking building design.

More news in due course! 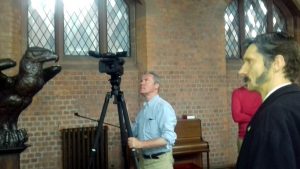 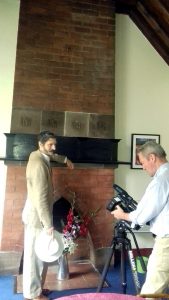